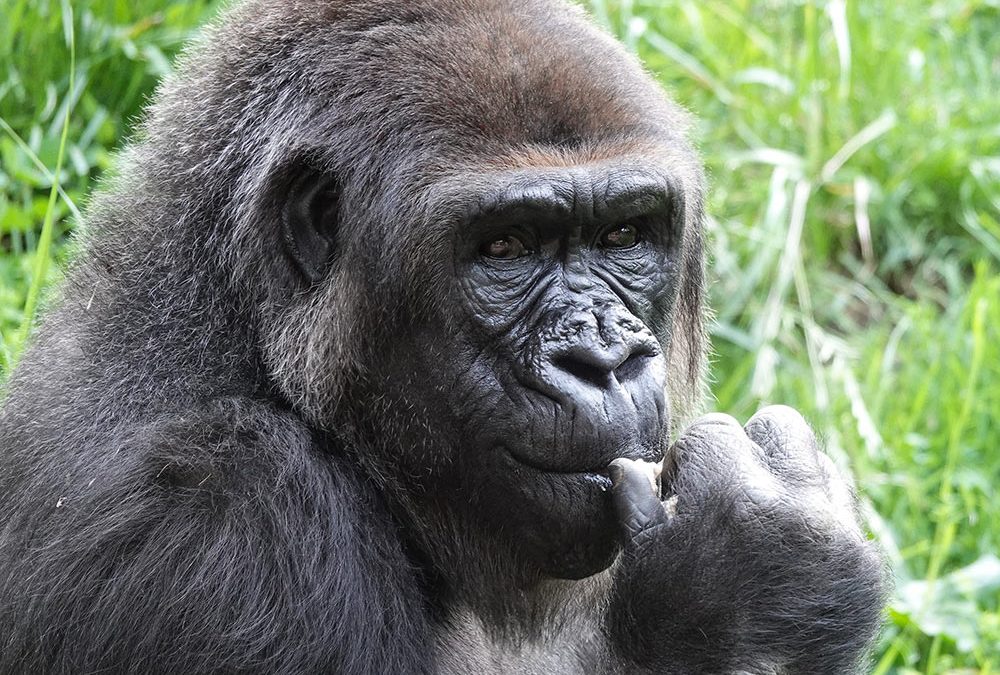 N’djia (24) was born on December 31st 1994 at San Diego Safari Park. Her parents are Kamilah and Winston. At 8 yrs old she was moved from San Diego Safari Park to San Diego Zoo where she lived with her half-brother Paul Donn and his family. In early June 2018 she moved again to the Campo Gorilla Reserve at the LA Zoo. This move was based on a breeding recommendation from the Association of Zoos and Aquariums (AZA) between N’djia and the silverback Kelly (31) who is already a father of two.

By all accounts N’djia, while being a smaller gorilla in size, is quite a spitfire with a spunky personality. Rapunzel (34) immediately bonded with N’djia and took her under her wing. It took Evelyn (42) a little longer but she can be seen sitting with N’djia now.

The romance with Kelly started slow and cautiously on N’djia’s side. However, Kelly took an immediate interest in her. Kelly is a patient and gentle silverback ansd quickly won her over. She is now comfortable being next to him and lets hope we will see babies on the horizon soon.

While browsing Youtube one day I came across this channel by i Bosch i ボッシュ from Japan. I Bosch i posts videos twice daily of a family of gorillas and a family of chimpanzees. I was soon hooked by the gorilla family. I never knew how loving, caring, funny and smart they could be. I soon started looking for other gorilla videos and found others who also post videos of gorilla troops across the world. I fell in love. I started on a campaign to find out as much as I could and do what I could to help save the great apes. This website is one small part of that project.

Fair Use and Copyright Notice:

This site contains copyrighted material the use of which has not always been specifically authorized by the copyright owner. It is being made available in an effort to advance the understanding and knowledge of great apes. The material in this site is provided for educational and informational purposes only.

It is believed that this constitutes a ‘fair use’ of any such copyrighted material as provided for in section 107 of the US Copyright Law. In accordance with Title 17 U.S.C. Section 107, the material on this site is distributed without profit to those who have expressed a prior interest in receiving the included information for research and educational purposes.

If you wish to use copyrighted material from this site for purposes of your own that go beyond ‘fair use’, you must obtain permission from the copyright owner.

Close Menu
We use cookies to ensure that we give you the best experience on our website. If you continue to use this site we will assume that you are happy with it.OkNoPrivacy policy
Revoke cookies